For the longest time, my girlfriends and I have been talking about having a pierogi party.  I will be hosting it in two weeks (stay tuned), so I made sure to steal the pasta roller attachment from my parent's house when I was home for Christmas.  I couldn't let it sit there, all sad in the back of a cabinet, so I decided to pull it out for a cooking night with Brad. 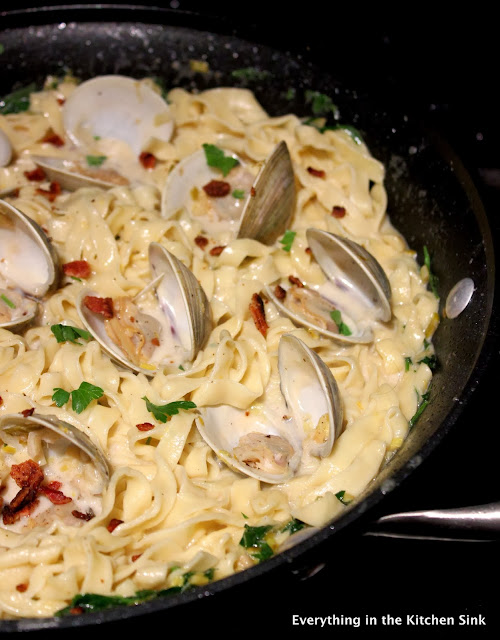 Because this was right after the polar vortex went through DC, I wanted to make a stick-to-your-ribs pasta with cream sauce.  I immediately thought linguine and clams with fresh pasta and clams steamed in the cream sauce.  I've never really worked with clams before, but I grew up on mussels and thought I could handle the mollusk. 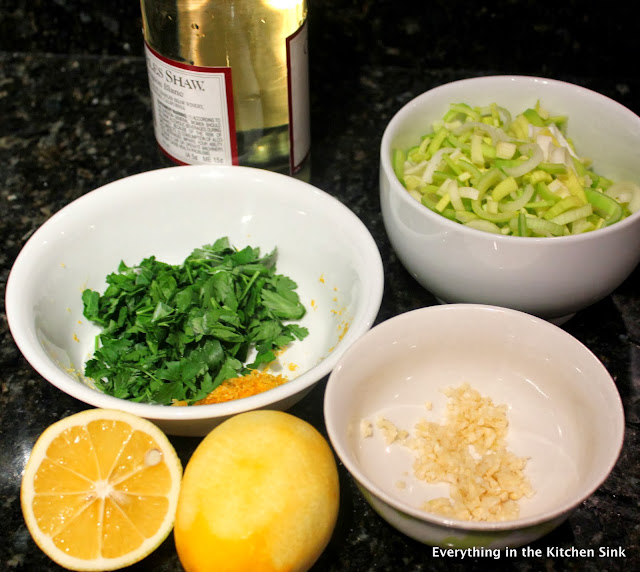 When I grabbed the clams, I talked with the fish guy to make sure I didn't need to do anything other than scrub the clams and do the typical flour and water soak to get out the grit.  I threw out any that are open or have cracked shells (only one, I was impressed!).  Pro tip: when you're bringing home the clams (or any other live shellfish) make sure you get ice in the bag and poke a few holes so the clams can breathe! 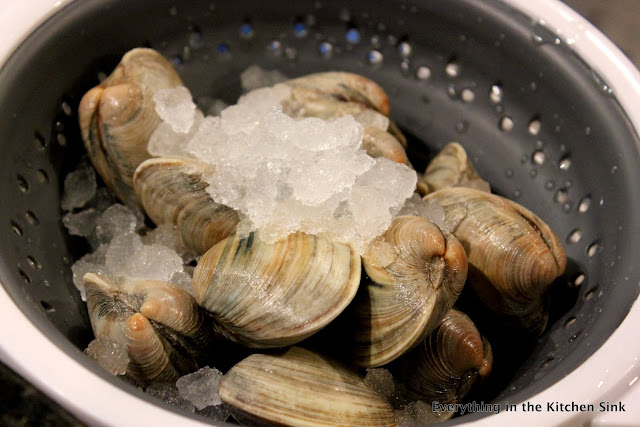 For the pasta, I used a simple recipe from Kelsey Nixon and added a bunch of meyer lemon zest to the dough.  This may have been a bit of overkill on my part for a dish with such a flavorful sauce, but I would love to try the pasta with just a simple garlic oil and some grated parmesan on top.  I rolled the pasta to the 5 thickness, cut the rolled pasta into noodle sized sheets, and then cut on the wide noodle attachment. 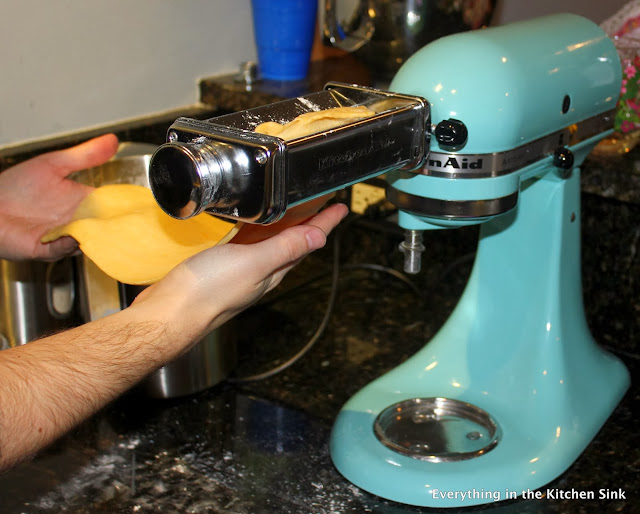 There are a few things that you need to remember to make successful homemade pasta.  When the dough is coming together, you want it to be a little tacky but never sticky.  Add a little more flour if the dough verges on sticky.  Always rest your dough for at least 30 minutes before rolling.  When rolling, keep everything well floured to avoid having to reroll (which I seem to forget once every time I'm making pasta).  And make sure to dry the pasta for about 30 minutes before cooking up al dente. 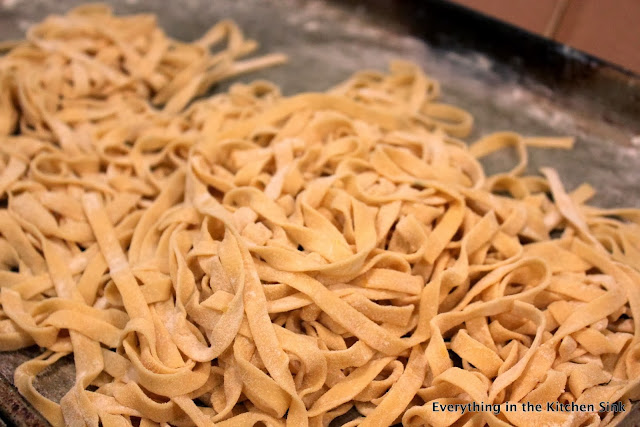 The cream sauce started with bacon, melted leeks, garlic, red chili flakes, and more lemon zest.  A glug of dry white wine and equal parts chicken stock and cream were allowed to simmer for fifteen minutes. Then the clams joined the party!  I got about 20 clams between the two of us, so we just nestled them into the sauce.  They opened up after about 5 minutes of steaming under a lid. 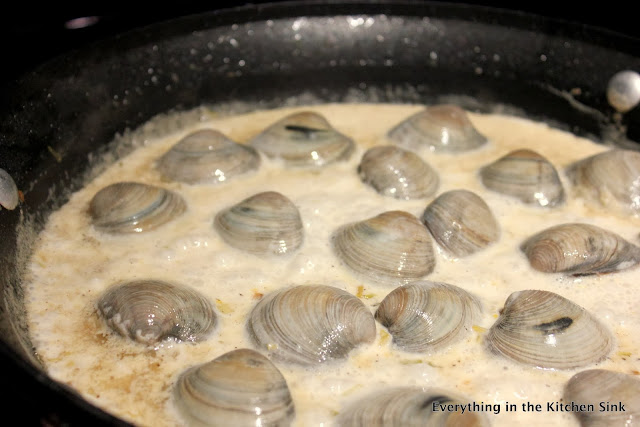 Once the clams were open and pulled from the sauce, we cooked the pasta al dente.  It took about 2-3 minutes with our recipe and noodle thickness.  The cooked pasta then got tossed in the cream sauce with a little pasta water to thicken it up.  The sauce was finished with juice from the meyer lemon, fresh grated parmesan, and flat leaf parsley. 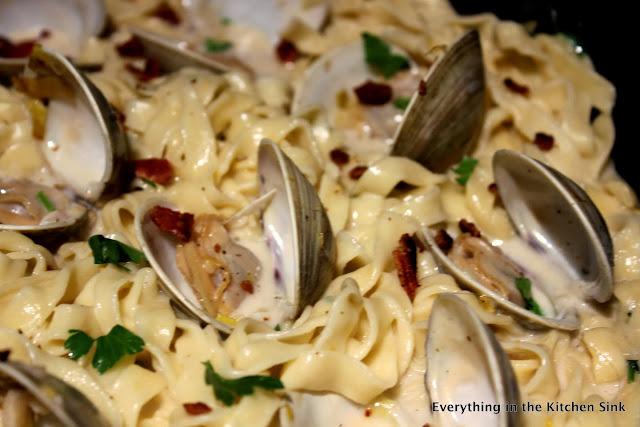 We served up the pasta in the pan we used to cook everything, just nestled the clams back in and topped with the cooked bacon, more parsley and parmesan, and a little bit of white pepper to finish.  Brad declared it was one of our best, and I have to agree!  Just quality harmonious ingredients used simply, my favorite way to cook.

Prepare the clams by scrubbing the outside in cold water to remove any outer grit.  To "clean" any grit from the inside, soak in cold water with a few tablespoons of flour for about 30 minutes.  Remove from the water bath and rinse.  Throw out any clams that are open (dead) or have cracked shells.

Begin the base for the cream sauce by cooking the bacon until crisp over medium high heat in a large sauté pan that has a corresponding lid.  Pull the bacon, dry the grease, and reserve for garnish.

Reduce the heat to medium low and add the leeks (cut in half lengthwise, then cut into half moons, and washed to remove grit).  Season with salt and pepper.  Cook low and slow until the strips begin to caramelize, about 5-7 minutes.

Add the garlic and cook for one minute before adding the zest and crushed red pepper flakes.  Deglaze the pan with the white wine and let reduce.

Once the wine has reduced by half, add the stock and the cream.  Bring to a boil, reduce to a simmer, and let cook for 15 minutes.

Next, steam the clams in the cream sauce.  Add the cleaned clams, cover the pan, and steam for about 5 minutes until all of the clams are opened.  Remove the clams from the sauce, throwing away any that did not open (dead).

Toss the al dente Meyer Lemon Linguine in the finished cream sauce, adding a little bit of pasta water to thicken the sauce.  Add in the meyer lemon juice and parsley and taste for seasoning, adding a salt and/or pepper if necessary.

Return the clams to the pasta; top with the reserved bacon, parsley, a pinch of white pepper, and fresh grated parmesan.  Serve up and enjoy!

I used the hook to knead the pasta dough, leaving it on a medium low setting for about 5 minutes.  Once the dough was knead, I put it into a floured gallon zip top bag.  Roll it out flat in the bag so that you got a rectangle of dough and then let it rest for 30 minutes in the fridge.

Before rolling, flour the dough, work space, pasta roller, your hands, and a baking sheet to hold the finished pieces.  Cut the dough into three even sections and get to rolling!

I finished on setting 5 then cut the rolled out dough about as long as the baking sheet to get noodle-sized pasta sheets.  Make sure they are well floured!

Once all of the pasta is rolled out, use the wide noodle cutter to make the linguine.  Ensure that the cut pasta does not stick together by tossing on the floured baking sheet.  Let dry for about 30 minutes before cooking in boiling salted water.  It should take about 2-3 minutes until al dente.  Toss in the cream sauce and serve up!