Confession time - I am not a brussels sprouts fan.  I have super sensitive bitter taste buds that don't play well with this particular power food.  The only upside of this sensitivity?  I've become a pro at zesting citrus because to get few a pieces of pith would ruin a dish for me.  Thus, I've pulled one of my Dad's recipes for brussels sprouts that he makes every year for Thanksgiving.  It's super simple: beer, orange juice, brown sugar, and chicken stock reduced and then used to braise the little buggers. 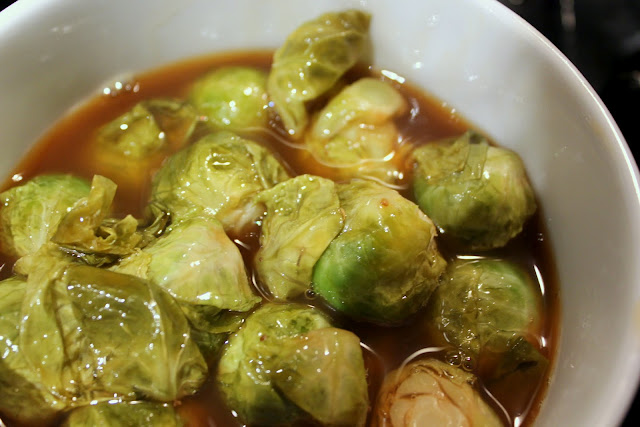 Brussels sprouts have two compounds (indole-3-carbinole and sulforaphane for nerds like me) that are anti-carcinogenic.  Caveat - you can't cook them too long, especially boiling, or the compounds will break down and be ineffective.  (Also, the sprouts will turn grey and taste entirely unappetizing but let's stick to the fighting cancer schtick.) 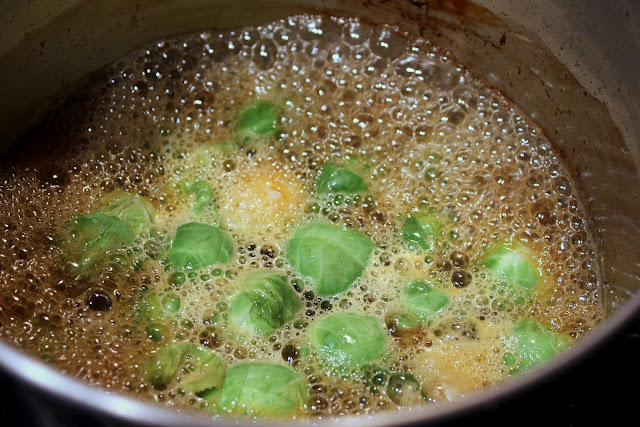 I changed up my Dad's recipe a bit, he loves Guinness and I only drink it yearly for St Pattys so I used Blue Moon since it is lighter (read: less bitter) and already has a twinge of orange in it.  This sauce is super versatile and can be used on any veggie that you don't particularly care for but know you should eat, just like I ended up enjoying the brussels sprouts (as long as there was only one sprout per bite and lots of sauce).  Not just for Thanksgiving anymore!

Start by making the sauce in a medium sauce pan.  Add the bottle of beer, oj, chicken stock, and the brown sugar.  Bring to a rolling boil and reduce to simmer.  Be sure to watch for boil overs, the beer can be tricky.

While the sauce is reducing, clean and trim up the sprouts.  I like to trim the base and then pull off the outer leaves that have become unattached.

Once the sauce has reduced by half, taste for seasoning and add salt, pepper, and if needed a little more brown sugar.

Reduce the heat on the sauce to medium to medium low and add the trimmed sprouts.  Stir gently and cook for about 2-3 minutes.  Serve up immediately and enjoy!  Don't forget to save the sauce!
Posted by Sarah Toasty at 12:42 PM